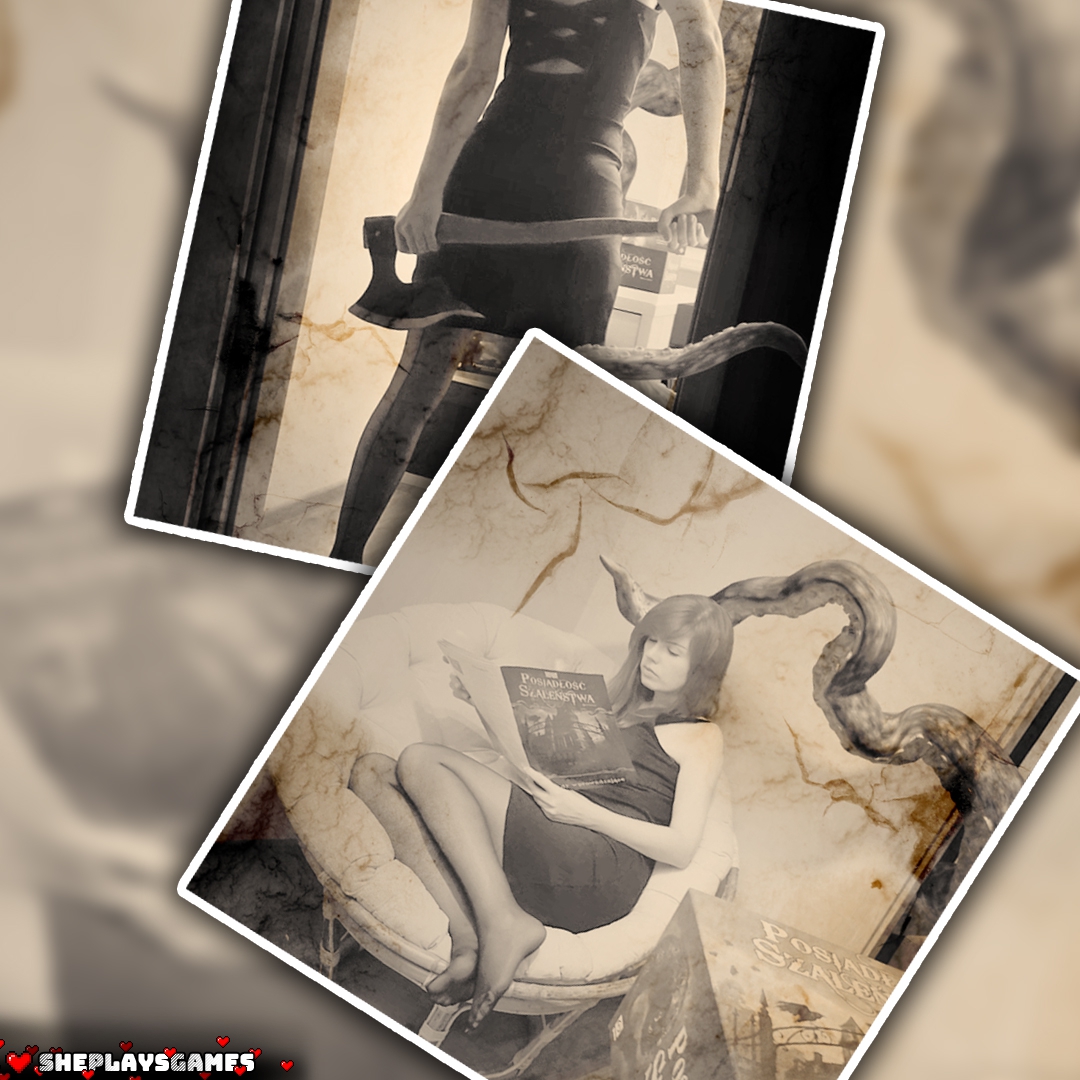 I always valued people with imagination. Personally, I think that this is one of the most useful abilities a person can have. Without the creative and practically unlimited capacity to evoke and create characters, worlds or things, there wouldn't be so many great games, books or fantasy and science fiction movies.

What about the dark side of imagination? Does it exist at all? Things we imagine don't always have to be beautiful and good. It is said that imagination likes to play tricks on us. It skillfully deceives our senses and logical thinking, by offering something unreal in place of facts, something outside the world we are familiar with. Something that can drive us to madness or ... even death.

By this introduction I would like to refer to the cooperative board game, in which if you don't have strong nerves and a loaded double-barreled shotgun or Tommy Gun at your side, you can quickly become an illustrative patient in a psychiatric facility in Arkham. I bet some of the readers already know what game I have in mind.

The Mansion of Madness 2nd edition will be the main topic of my today’s post. I want to point out that this entry will be more of my own impression of the game instead of being a typical review of it. The title itself is present on the game market for several years and has positive feedback from players. I would also like to point out that I have never played in its first version, and I am not a fan of Cthulhu mythology, although I have heard about it from friends. It is them who decided to give me the Mansion of Madness for my birthday. They chose the Polish version of the game to make the playing experience understandable for them and other people who are not fluent in English. Well, I have to admit, their present was perfect. The game delighted me almost immediately, and H.P. Lovecraft's books are already waiting to be read on my bookshelf.

The thing that, in my opinion, deserves attention in the first place is the overwhelming atmosphere of horror and mystery, which simply pours out from a large box with the game elements. Those dark colours and illustrations inspired by New England from the early twentieth century are something that attracted me personally and encouraged me to take a look into the box. If we add to it tiles and cards kept in a similar style, we get a fully consistent graphic design in a really dreary vibe. I almost forgot to mention the well-fitted music from the game application, which is like a cherry on top, served by the game creators. Its disturbing character has both quiet, low tones and loud, high sounds. It perfectly keeps the player in suspense, at other times it frightens and speeds up the heartbeat, thus enhancing the sinister spirit of the whole game.

The second thing worth mentioning is the simplicity of rules and the easiness of the game preparation. The whole set-up with well organized players takes very little time. A significant addition to each scenario is a narrative prologue said by the lector at the beginning of the script. The gameplay is divided into two phases: Investigators and Mythos. The latter part of the game has to be managed by the application, which is supposed to be the game master. It tells the investigators about a random event at the beginning of the Mythos stage, movement and monster attack, and a horror test at the end of it. The app also guides players on what throws they should make during the attack, defense or room exploration and interaction with NPCs in their phase. The downside is that you have to read the effects of the above mentioned actions on a regular basis, so that one player is somehow forced to keep looking at the screen instead of focusing on gameplay and investigating.

Nevertheless, the application has definitely more pros than cons. It adjusts the pace of gameplay, determines the number of monsters and the difficulty of the scenario based on the current number of players. An interesting fact is that there are several ways to go through each scenario, and the goal of the game changes dynamically as the action develops, and the players make their choices. The application is completely free to download from Steam. The program also allows you to purchase additional scenarios, not mentioned in the expansions, and saving saving the progress of the current gameplay, which allows us to complete the scenario in the future. Another advantage of the application is its compatibility in combining elements of tiles and cards with expansions, which results in the possibility of using spells, objects or monsters in different scenarios. This additionally ensures that the game does not get bored so quickly.

All right, let's focus on our investigators. At the very beginning we have 8 different characters to choose from. Of course, this number increases with each expansion to the game. Interestingly, each of the investigator is completely different, which is well reflected in the statistics. For example, a parapsychologist will have more knowledge and sanity, while an athlete will have higher values reflecting physical strength and health. As part of the storyline titbits, I like the outline of the history of each of the characters placed on the back of the cards, and the unique skills belonging to the character or profession of the researcher, which are supposed to be helpful during the investigation. It is worth noting that despite the fact that the game remains cooperative, each of the characters has a lot of freedom in making their own choices. He or she does not have to solve the investigation together with the other players. Instead, the player can separate from the team, and focus on exploring or solving riddles. Which I personally like very much because it allows you to discover secrets. However, it is important to remember that investigators automatically lose if one person from the team is killed.

The last thing I really like is the Spell Cards and Insanity Cards. The first shows that magic can be dangerous, and using it always has consequences. Some of them can be disastrous for the researcher and cost him or her health or, even worse, lost of his or her senses. The Insanity cards, on the other hand, are a great addition to the game for those, who are slightly bored with the standard mission and scenario. Why? Let me explain. These cards change the conditions of victory for a given player. The effects are different and cannot be revelaed to others. No one really knows why you've gone mad and what your real motive is. Such suspicions can sometimes cause a lot of confusion when solving a scenario, by introducing an element of betrayal.

In all this admiration for the game, unfortunately, there is an important thing that really bothered me during the game: monster figures and their bases. I will not judge the quality of the models, because it is a matter of personal preference. However, the most annoying thing was the bases, which covered a lot of space on the map tile. Not to mention the difficulty of locating the monster on its surface, and the difficulty of reading the stats after inserting the identification plate of the creature in the middle of the base. I had a much nicer gameplay with the monster's tiles alone. Not only did they take up less space, but everything was visible on them.

Generally speaking, the game in a very short time became my favorite title. The Mansion of Madness engulfed me so much that my collection of expansions for this item was rapidly expanded with reprints of Beyond the Threshold and Horrific Journeys. I haven't had a chance to play all the scenarios yet as I don't have enough free time, but I'm working hard to catch up. I'm curious to hear your opinion about this game. Can you have other interesting games worth recommending in a similar style?