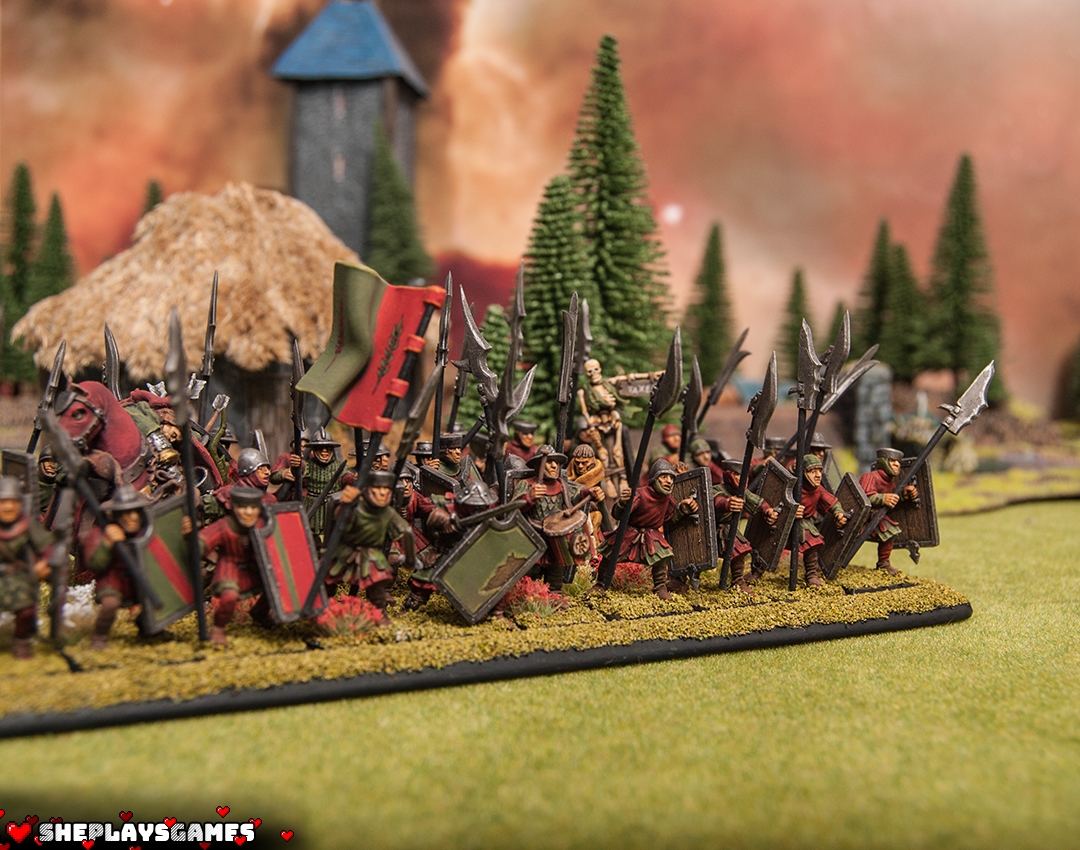 For home, for the king, for life!

It's been a while since my last entry on the blog. Fortunately, every cloud's got a silver lining. And so I managed to finish the Men-at-Arms unit of 50 peasants + 2 fillers. It lasted a long time, as the project was also ambitious. It involved not only painting, but also preparing the models and converting them. I should add that these are figures converted from miniatures made by Fireforge Games with the exception of the two champions from the HeresyLab. I used my own 3D prints of shields and halberd tips (you can read about it in the previous post). I haven't mentioned the fillers before, so it's worth writing a few words about them.

One of them is a wounded knight, who is led on horseback by a frightened Peasant Bowman. The inspiration for it came from a picture from Warhammer 6th edition Warbands. As a variation, I added a shield hit by arrows and a heart locked in a box as a symbol of love for his beloved. In this case I used a lot of Green Stuff and bits from the Knights of Bretonnia box.

My second filler, on the other hand, depicts a debt collector surrounded by chests of gold. He has been sent with a Men-at-Arms escort to collect taxes from the poor inhabitants of my kingdom. The collector gathers the tribute in the presence of a skeleton, who reminds them of the consequences that await those who evade payment. After all, someone has to sponsor the feasts at the court of the noblewoman ;) While creating this filler I used, among others, boxes and candles from Mini Monsters and a boy with a slingshot from Trebuchet.

As for the painting itself, it was monotonous at times. A lot of the same elements can be quite discouraging. I should add that this is the first so big unit I have ever managed to paint. I chose a red-green colour scheme and stuck to it consistently, both on the clothes and on the shields and fillers. I wanted consistency. As for the banners, I intended for them to have a simple look, without any reference to a particular Bretonnian kingdom. I am very pleased with the shields, they came out aesthetically pleasing. I have been using mainly Citadel paints, but for the first time I used a few shades from Scale 75 (mainly green and red, but also some yellow and gold). I have to say that they are great. They have excellent coverage and very good texture. In my opinion they are perfect for airbrushing - they don't block the nozzle and they are very smooth on the model. They do not delaminate and above all, they come in a convenient bottle for application.

To make a long story short, below are the effects of my work.