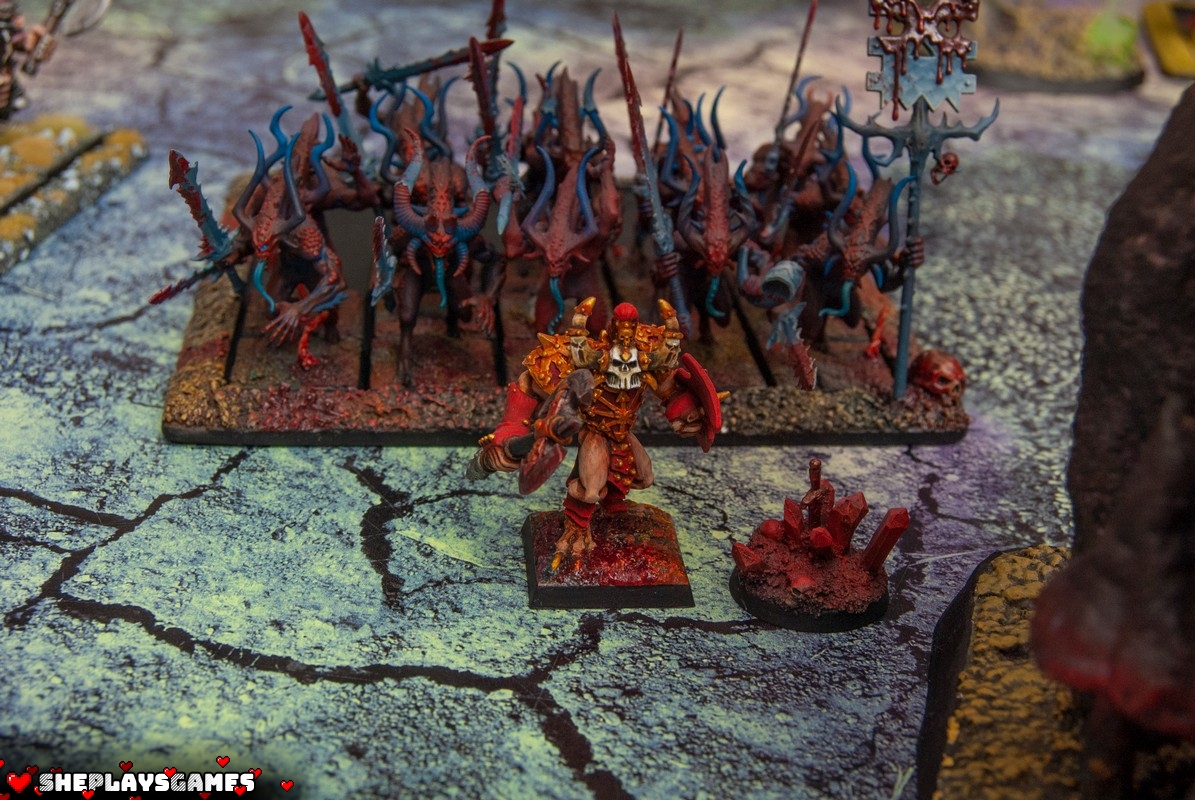 Into the darkness of the Novalone Pass

It has been almost a year since Sir Bertelis ventured south to Bretonnia with the fellow Questing Knights. They were sent to this place by the Damsel of the Lady named Heloise. She saw in her dream a great danger awaiting the inhabitants of the Carcassonne dukedom. Sadly, no one has heard from them since then. Unsure of their fate, she decided to consult her thoughts with the Baron Theudis, a knight of the Grail. True to the words of the messenger of the Lady of the Lake, he decided to gather a small army and set out with Lady Heloise to rescue the sons of Bretonnia. As they approached the Novalone Pass, they noticed two splitting routes. They had to decide which one to take. Getting lost in the mountains is not a good idea... especially at night.

I've prepared for you a battle report from a mini campaign for Warhammer Fantasy Battles, which I had the pleasure to play on a trip to Cracow. I prepared my army for battle, planned the road, packed everything including several boxes filled with terrains, got in the car and drove to a person living more than 250 km from my home. Not just any person, because Paweł has a beautifully painted Dogs of War army by a professional painting studio. Take a look at the pictures - they are really stunning.

Interestingly, Paweł and I met through the internet. We were exchanging tips on preparing and painting models. We were also talking about interests, favourite things and then finally one day Paweł threw down the gauntlet to my Bretonnia and we had a chance to meet face to face. What is more, he played the first ever Warhammer Fantasy Battle 6th edition game, where his Dogs of War army debuted on the table. A relaxed atmosphere, with lots of laughs - in other words: the fun and the company were great, so we were just waiting for the next meeting.

Thus, we recently had the opportunity to see each other for the second time around the battleground table. As I mentioned at the beginning, this time we played the campaign led by Giovanni Giorgio. He also took an active part in it, giving orders to the followers of Khorne, led by Haargroth the Blooded. I believe that it is worth writing a few words about this miniature. For example, you have to convert this model by yourself from different bits. In order to build it you need the body of a Bloodletter Champion from 5th ed, the head of a classic Archaon from 5th ed, the hands of an Orc, an axe from a Chaos Warrior from 5th ed, and a shield from a Chaos Knight from 6th ed. For the record, I would add that the character is officially mentioned in one of the White Dwarf magazine and has an interesting history, e.g. he participated in Storm of Chaos. However, GW never released a model of him, contenting themselves with showing only a conversion of this figure. This ambitious follower of Khorne challenged Archaon for a duel. The outcome of this clash was easy to predict. However, the Everchosen of Chaos spared Haargroth's life and even made him one of his lieutenants.

Alongside him, my Men-at-Arms also made their debut on the battlefield. I was very eager to finish them just for this trip. I gave 200% of myself and it turned out well. They were able to come with me and participate in their very first battle.

In addition, our host also showed a newly painted unit of Golgfag Maneaters in his army. These Ogres were destroying and eating everything on their way.

Course of the Game

The campaign was divided into 3 scenarios and was played in the underground of the Irrana Mountains. It is here that the Novalone Pass is located - a corridor connecting Tilea with Bretonnia. Actually, I can boast that I co-designed the terrains used in the scenarios, which were meant to imitate caves full of trees in the form of large mushrooms. We played on 6th edition with the home rules set added. Our game master presented me and Paweł with a map with lots of corridors, forks and strange nooks and crannies.

Each of us had to split his or her troops into two armies with at least one hero. Some mysterious markers were placed on the table, which hid something. Could it be treasure, or maybe a horde of demons? We were not informed of the details. Nor could we show each other how we divided our army. Nobody spoke of any alliances, but we agreed silently that the Daemons of Chaos were our common enemy and they had to be destroyed. I don't even know how it happened, but in my general's pocket by a strange coincidence I found a document in which it was written in small print that although Bretonnia cannot take mercenaries into its army, it owes the Tilean Paymaster and his warriors gold for their service.

I split my troops for fun into peasantry (on foot) and knights (on horseback).

At the time I didn't know what tasks we were going to be given and what was behind the mysterious markers. In this game I chose Men-at-Arms, supported by Peasant Bowmen and Lady Heloise with her Lvl2 Life Magic. As I approached one of the markers, Fleshhounds of Khorne appeared from the corners circling over some of the lost Questing Knights.

I also learned of the existence of a second expedition in the form of the Dogs of War, who had also travelled here for similar reasons. Their expedition, in search of gold and treasure hidden in these undergrounds, went missing around the same time as my Questing Knights. So, they set out to rescue their comrades, although for me the argument of recovering the gold is more convincing.

Eventually, my Men-at-Arms were charged by the Fleshhounds of Khorne and lost 6 men from their unit. Fortunately, in the end I was able to save some of the Questing Knights, and Paweł saved some of the Paymaster's Bodyguards.

Additionally, each unit had to get through the maze of corridors and reach the other side of the table. Unfortunately, I didn't manage to do this with even one unit, which resulted in them being moved to the reserves.

Apart from the delayed arrival during the final battle, these units were given cards with negative effects that would apply to them until the end of the game, e.g. -1 to Leadership stats.

The second scenario had the same objectives as the first - to rescue the lost warriors. This time I managed to complete the mission and rescued all the Questing Knights. The mounted units dealt with the Fleshhounds of Khorne without any problem. Paweł also had no trouble gathering an entire unit of infantry. Lady Heloise felt a strong concentration of magic in the centre of the cave. It was likely the place where the artifact might be located. What if it's even summoning the Khorne daemons we've faced so far?

We reached the place where not only the artefact, but also the army of Khorne with Haargroth at its head appeared before our eyes.

It was he who was closest to the treasure and held it in his hands until the end of the game. The Triumph & Treachery supplement was introduced to add variety to the game. We played using Treachery Cards and counted points based on the rules from the above mentioned expansion. So, regardless of the alliance with Dogs of War, for which Bretonnia will pay dearly, the forces of Chaos were stronger. Let's hope it was only for a moment.