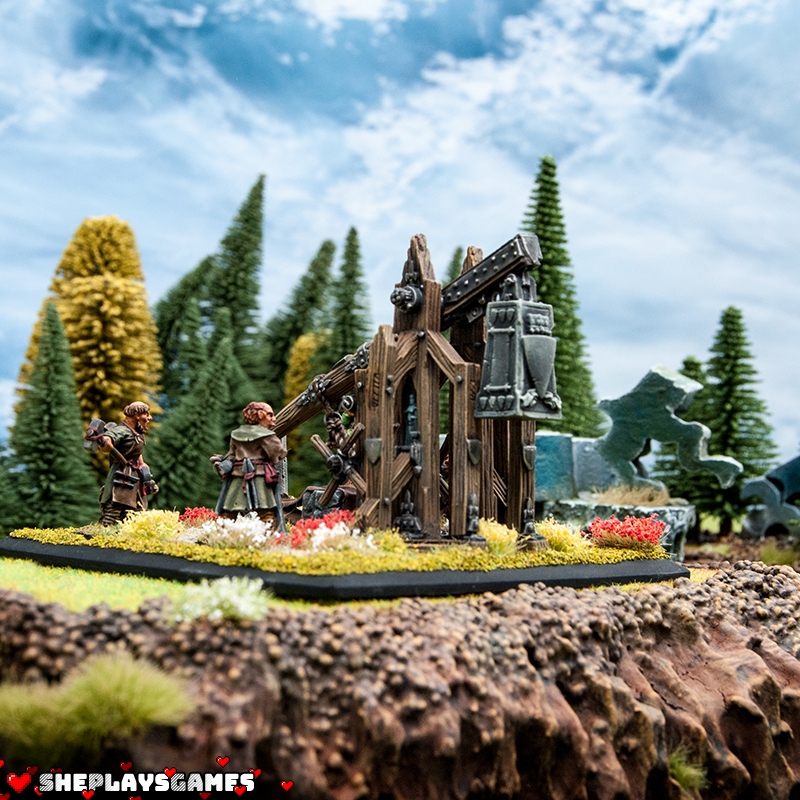 I've been thinking about refreshing my Bretonnian models for some time now. Not only in the terms of bases, but also the very painting. The years of service in the army have done their job. The colours are fading, and in many places there are scuffs which are evidence of the models' frequent use during battles in tournaments or at home. First of all, I restored Trebuchet, which fell off the table during one of the Warhammer Fantasy Battles (6th) tournaments. I don't even remember exactly how it happened. Fortunately the Lady of the Lake must have blessed the crew and Trebuchet himself that day by protecting them from the worst. The stripped paint on the beams of the machine and on the nose of one of the peasants is all that happened to them on that fateful day.

The model itself served me for quite a long time in many battles as a Rare Unit. To be honest, I was very good at shooting Trebuchet. As a result, it wreaked havoc on the enemy infantry. After all, a hit from S5 without armour saves rolls can hurt anyone, even a knight in full plate armour. Not to mention the central hit with S10, which perfectly levelled the monsters' high Toughness, while the possibility of inflicting D6 wounds with one hit could take down even the Deamon Prince or the Dragon Ogre. What about Grail Knights, you ask? No respectable Lord of Bretonnia goes into battle without them. Well, the reason for their absence in my army was trivially simple - I didn't have them at the time. It was only recently that they became a part of my kingdom army forces.

Originally the machine has no base, but I decided to make one for visual reasons. The scenic base also makes it easier for me to put it on the table during the Deployment Phase. To give depth to the wooden structure I used Citadel Shades. The colours were too monochrome beforehand. The metal parts were edged as well as the clothes of the crew. What I'm really pleased about is that I was able to do a freehand in the form of fleur-de-lys on the cloth covering the dog. I've always had a problem with this in the past, and the recent Questing Knights heraldry painting allowed me to hone my technique a bit and train my hand in painting Bretonnian lilies.

Of course, the base got new scenic scatter and tufts in the form of a bunch of white and red flowers. Everything has become more colourful and vibrant. I am very happy with the final result. I hope you like it too. I will systematically refresh other Bretonnian models, so feel free to follow my progress in this matter ;)